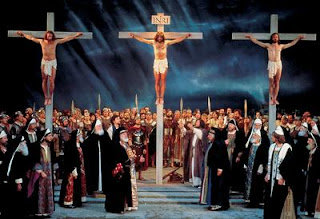 History of the Oberammergau Passion Play


The history of the Oberammergau Passion Play dates back to the middle of the Thirty Years War. In 1633, after months of suffering from the Bubonic Plague, the people of Oberammergau took a vow to perform the "Play of the Suffering, Dying and Resurrection of our Lord Jesus Christ" every ten years if they were spared. Miraculously from that point on they all survived and true to their promise, the first performance was in 1634. This simple performance was held in a meadow and acted by the villagers. After 1674 they decided to change the date, so as to fall every ten years beginning in 1680. The only time it was not performed, was during World War II. This time the play will open on May 15, 2010 and ends on October 3, 2010.
Who takes part?
The entire cast consists of villagers who have lived in Oberammergau for at least 20 years. They must also be amateurs and people of high moral and ethical principles. Villagers also make the outstanding costumes. As no wigs are used, participants must grow their hair and beards for several months prior to the performances, beginning on Ash Wednesday 2009 according to the "Hair Decree." 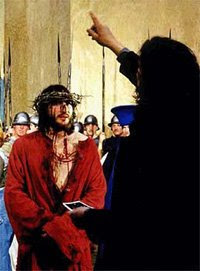 By glorifying the Lord for saving their village during the plague, they are fulfilling Psalm 145:4-6 "One generation will commend your works to another; they will tell of your acts. They will speak of the glorious splendor of your majesty, and I will meditate on your wonderful works. They will tell of the power of your awesome works, and I will proclaim your great deeds."
The producer of the 2010 play is Christian Stuckl. The conductors are Markus Zwink and Michael Bocklet. The designer is Stefan Hageneier.
Why see a Passion Play?
Passion Plays recount the life and ministry of Jesus Christ from the four gospels in a dramatic form. This tradition began in the Middle Ages and are often performed in churches during Easter week. By watching a Passion Play we have a chance to reflect on the events most central to our faith, that Jesus died, was buried and rose again from the dead.
Posted by Unitours at 11:42 PM